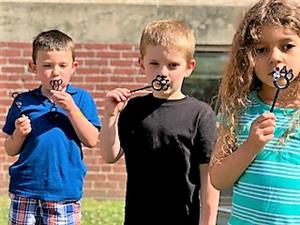 Marlborough, Mass. – Kelly Hall, a fifth-grade engineering teacher at Whitcomb middle school loves following people on Twitter. It’s where she gets some of her best creative ideas for teaching. In fact, her most recent engineering lesson, making bubble wands using a 3D printer, came from Twitter.

With only one 3D printer and 400 fifth grade students, Hall knew that this creative engineering project would be a challenge. Creating one bubble wand, in the shape of a paw for the school’s Panther mascot, took approximately 40 minutes. Some designs for the 3D printer can take 9 – 10 hours to print. However, determined to make this project a reality, Hall’s students got to work and designed the “Panther Paw Bubble Wand” as well as other wand designs.

During Hall’s Maker Space Club, a group of her fifth graders used Tinkercad to learn basic Computer Aided Design. A group of 7th grader volunteers then worked with the fifth graders supporting them as needed to create the Panther Paw Bubble Wands. “I have some fifth graders who are already rock stars!” exclaimed Hall.

Hall then posted an image of the successful prototype and was immediately contacted by the PTO president of Marlborough’s Early Childhood Center (ECC) to order the wands. Panther Paw Bubble Wand production went into full swing! In the spirit of authentic learning and peer teaching, Hall’s fifth graders visited with the ECC students who had a blast with their new Panther Paw Bubble Wands.

In Hall’s fifth grade engineering class, her students have made name plates, key chains, pendants, trophies, desk caddies, cell phone holders and more using the 3D printer. “I would love to have students work in groups all year and share bubble wands at the ECC ice-cream social next year,” stated Hall. “I would love to have more 3D printing happen next year that connects to my STEAM curriculum. Propeller designs for turbines, wheels for coolers, and parts for Rube Goldberg machines, are all possibilities,” smiled Hall.